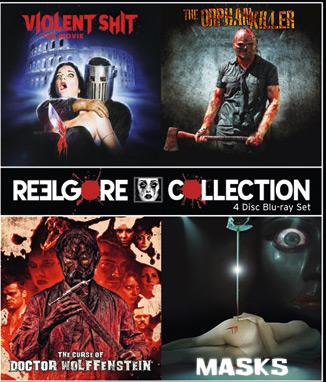 Color 389 minutes In German and English with English subtitles

VIOLENT SHIT – THE MOVIE
Rome is shattered by a series of gruesome murders that paint the Eternal City deep red. Italian Police Inspector Aristide DAmato and his German counterpart Hans Ebert initiate their criminal investigations. They stumble upon the eccentric Professor Vassago – a master of myths and mysteries and driven by power and perversions. The suspicion grows that these atrocious crimes are connected with the return of one of the most heinous serial killers of our time “ Karl the Butcher!

MASKS
In her quest for fame, drama student Stella gets caught in the grip of a mysterious and deadly stage school. Stella longs to be an actress. When she is accepted to a private school in Berlin, her dream seems to come true. But there is something wrong with the Matteusz Gdula-Institute . At night, Stella hears eerie sounds in the corridors of the school. A fellow student disappears. Stella suspects that behind the closed door to the abandoned, forbidden wing of the school lurks a bloody secret. A secret that kills the students…

THE CURSE OF DOCTOR WOLFFENSTEIN
80 years ago, the diabolical Dr. Victor Wolffenstein created a vaccine to gain immortality. In order to stop Wolffensteins reign of terror, the local villagers captured him and buried him alive for his crimes. In present day, five teenagers plan to attend an out of town rave that goes awry, and end up stranded in the village, when the evil and still decaying Dr. Wolffenstein wakes up, screaming for vengeance! Will anyone survive Wolffensteins skin melting, limb-hacking Wrath?

THE ORPHAN KILLER
The Orphan Killer is a tour de force murder flick that defies classification. It goes far beyond current trends in gore and breaks open a new suffering genre of horror. Marcus Miller is a serial murderer hellbent on teaching his estranged sister Audrey what it means to have family loyalty. His lessons are taught in massive doses of vulgar and unimaginable pain. Throughout her brutal torture we learn that Marcus is not the only Miller with Killer in the bloodline as Audrey proves to be a formidable adversary. 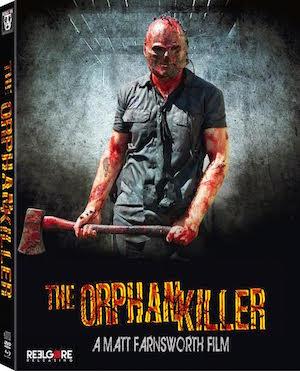 The Orphan Killer is a tour de force murder flick that defies classification. It goes far beyond current trends in gore and breaks open a new sufferin...
£22.59
View details